A quick Google of “when to have a baby” will turn up tons of articles written for women, by women. From Women’s Day and Parent’s magazine, they offer plenty of recommendations and reassurances to those who have had kids earlier and later in life. So why is there none written for men? Because we don’t need it. Or do we?

We’re not the ones carrying the baby through gestation. We’re not going to experience the pain of childbirth, the most painful experience a woman will likely endure – unmatched by anything men would willingly experience. We’re also not going to be the ones breastfeeding the baby for another 9 months outside of the womb. I don’t think most guys would be willing to take a 2 year sabbatical from their favorite quaff for any of this.

The truth is, men are never ready to have their first baby, they are only capable of it. Nothing will prepare a man for having a child like childbirth itself.

During my wife’s first pregnancy I did little preparation. My wife had unbelievable nesting urges. She really got into couponing, and building up our pantry “nest.” I was fascinated with the biology of it all, but I never had any urges myself. Truth be told, I probably would have never suggested to my wife that we have kids. I simply waited until her biological clock was ticking so hard that I had no choice. She wore me down, like a “typical” guy in a committed relationship who’s unwilling to propose marriage. Fear of the unknown is probably the best way to describe it.

I didn’t have a hospital bag packed for our firstborn. In my defense, neither did my wife. We blissfully rolled into 9-months of pregnancy as if it weren’t inevitable. Could we just wait until the last minute? Sure, why not. Then we went to the hospital on a false alarm. So when we got home, did we pack bags? Heck no! When we went to Jessi’s next regular doctor appointment they informed her that her water was broken and we needed to go straight to the hospital. We told the doctor that we hadn’t packed bags, so we went home, packed them and then went to the hospital.

Several hours later, I was a father. The biggest bombshell is that now I’m morally and legally responsible for another person’s life. This is the metamorphosis that happens within men upon the birth of their first child – coming to terms with the newfound responsibility. Lack of sleep aside, the time after my son Jules was born was joyous. I never thought that I’d adjust to fatherhood, but it’s like I said, nothing will prepare you until you’re holding him in your arms. 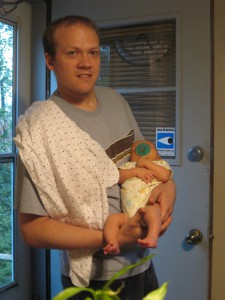