At my age, it’s not often that I get to say this anymore:

I’m too young to remember but… Bike shops back in the day had a mechanic who was also versed in welding and brazing. He may not have been a bike builder by trade, but knew how to add accoutrements to an average bicycle such as eyelets for racks, fenders, bottles, etc. Today that person doesn’t exist in the bike shop, but s/he does still exist, in the form of your local bicycle builder.

My need was for a bike which could tote a human child. While in Belgium, Jessi and I rode bikes with kid seats mounted over the back wheel, which my son and I had enjoyed: 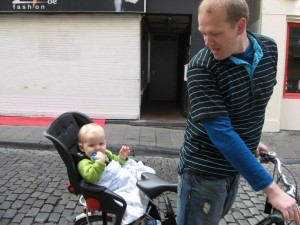 A friend of mine recommended getting a Chariot Carrier – he said other trailers he tried were cheap (quality wise) – Chariot’s are definitely not cheap. But I quite enjoyed our Belgium ride set up, and I found the Topeak BabySeat which mounted atop a rack that could be used for other things, and it was 25% the cost of a Chariot without any fixin’s.

Unfortunately my bicycle did not have any provisions for a rack. I could have sold my bike or frame and got another with mounts pre-installed. Or I could have just got the Chariot Carrier. Both of those options were going to cost a pretty penny. My favorite local bike shop recommended me to Erik Noren at Peacock Groove, suggesting he could simply add some rack mounts to my frame. Having Erik add mounts was going to still keep it cheaper than the other options, plus I get to keep my bike which I’ve grown attached to. Erik’s bread and butter is building complete bikes, not doing bike mods, but if you can fit your modification needs into his busy schedule, he can surely do it – he can pretty much do anything with a bicycle.

Erik gave me the “star” treatment with these water bottle mounts acting as rack mounts on the seat stays: 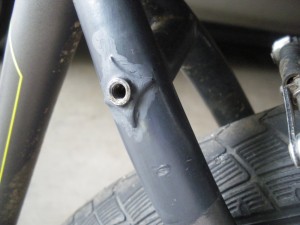 Forgive my shoddy paintwork, it’s meant to be cheap and functional, not a show bike.

Then Erik added a super-beefy mount to the dropout for the rack to thread into: 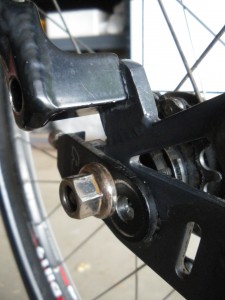 Erik does amazing work and I would trust him with my son’s life. 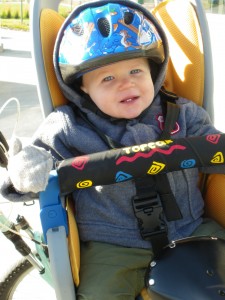