Before I get into any questions like “What the heck is a split phase intersection and why would you have a favorite?” Let me give you some back-story… I’ve been attending a series of workshops revolving around State Highways 65 & 47.

I’ve got several opinions about these roads and their intersections, and one very loud opinion that we don’t need both to act as expressways, we just need one.

Luckily, I learned at the meetings that my fellow residents share the same opinions! I was delighted at the first two meetings. Do I think MnDOT will actually listen? Probably not, but that’s when we’ll sick Mayor Lund on them 🐕

Another big issue brought up at the workshops is how the intersection timing across both 47 & 65 favors traffic going north and south. Residents that are actually trying to just get to the other side of town find themselves waiting endlessly.

So what’s up with split-phase intersections? Well, let’s define it first:

Here are the technical details behind split phase intersections: https://safety.fhwa.dot.gov/intersection/conventional/signalized/fhwasa13027/ch5.pdf#page=11

They aren’t known for their efficiency – they’re a band-aid for poor road design. But I think I’ve found one of the better ones which others should emulate.

Most of these are in place because of road geometry. The state highways (65 and 47) are so damn wide that there can’t be two left turn lanes running simultaneously without cars crashing head-on. 4-to-3 lane road diets could alleviate those problems, but until then let’s look at the signal timing – a software problem we could address today.

None of the split phase intersections work well for residents in Fridley, whether they’re driving, walking or biking. So let’s look a well-timed example to copy.

I used this intersection twice daily by car or by bicycle for 4 years. It is on the way to my kids’ day care provider. I didn’t like it at first… in my car when you leave Highway 65 and go on County Road 10 west, it’s the first signal you’ll encounter. 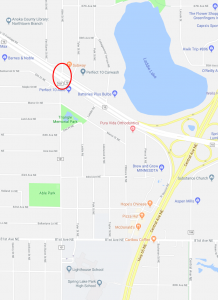 More often than not the signal would be green and then I’d see it change to red as I was approaching. I’d silently curse to myself (trying to watch my mouth as a new Dad). But after going this way about a dozen times, I realized something. I’m almost always going to see the light change from green to red because it’s constantly changing all the time. This is a good thing because it won’t be red for long for either the people on County 10 or Able St.

The first question traffic engineers will probably ask is “how much traffic goes through there?” It’s sees 20,000 vehicles per day on average. Keep in mind the times when I was using this intersection was always during rush hour, 7-8AM and right at 4PM.

#2 is the option residents are shooting for. Remember when the 35W bridge collapsed? If I recall correctly, traffic was a little nutty for about a week, and then… Poof! Everyone found a different way about town and traffic wasn’t drastically worse than when 35W was wide open.

We should at least give this cheap-and-easy timing change a shot. Got any other ideas for these roads? Share them in the comments.