No I don’t mean rename it, Fridley already has a Main St. which was probably named because of its proximity to the railroad.  But if you look at Mississippi St., it truly has the potential to be the main street of Fridley.

Now the bad news: this STROAD is too fast and too wide to provide any value to the businesses and residents on or near it.  It is home to a dumpy strip-mall which is almost impossible to get to as a pedestrian. Mississippi St. could easily go on a road diet.

For the sheer width of the road, it could be changed from 4 lanes to 2. The speed limit could be lowered  to 30MPH (or even 25) and on-street parking allowed in lieu of the extra lane. There’s probably room for bike lanes left over, and the city – or county, as this is a county road – could add sidewalk bump-outs at the intersections so it’s faster and safer for pedestrians to cross the road.

I mentioned this idea to my neighbor – whose child attended Hayes Elementary – and he remarked that the road size is warranted for (automobile based) school arrival/departure. There is a solution for this problem and it is called a school bus.  You’re paying for it though your property taxes, so you might as well use it and save yourself the headache.  Leave it to the school bus drivers.  They’re trained to be better (and safer) drivers than the rest of us. And safety, it seems, is paramount:

Safe Routes to Schools interviewed parents in 2012 about why they drove their children to school. The overwhelming response was concern about traffic speeds, crossing busy highways and general safety.

Fridley’s own Activate Transportation Group, which I’m a part of, recommends the city/county “eliminate parent parking on the south side of Mississippi St. directly opposite the school and to enlarge the east side entry apron at the curb to better accommodate school buses entering the driveway.”

The problem isn’t parking, it’s the fact that kids are crossing a 4-lane road with cars traveling at 40MPH. Once it’s two lanes parents will instinctively send their kids on the bus so they don’t have to deal with traffic. Then the school driveway can stay as-is because the turning radius will have been effectively been increased. Done and done.

Why not zone Mississippi St. so that all homes along the corridor can be home-based businesses? Allow residential to commercial conversions so foreclosed properties can be transformed into useful, productive places. Some of the setbacks on Fridley homes are so deep that you could literally put a business in their front yard, right next to the sidewalk: 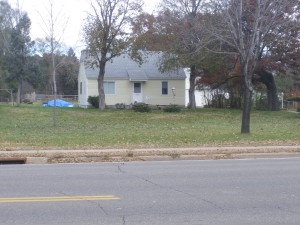 Business owners wouldn’t have to “live above the shop” – they could live behind the shop. How awesome of a commute would that be?

My other neighbor, who is in her 80s and has lived in Fridley since the early 60s. She told me how her friend moved to Mississippi St. in the 60s to open a salon. The city should re-ignite the local economy by giving people an opportunity to spend money locally. I bet if there were a locally owned convenience store a block down from the elementary school, it would be frequented by Fridley’s youngest consumers.

Look at this imposing wall: 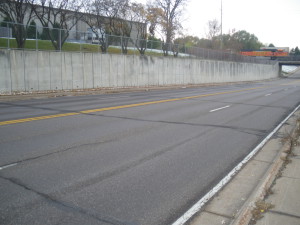 It could be a blank canvas for a pretty incredible mural. Guess what? There’s a wall exactly like this one on the other side of the street! Transforming what is one of Fridley’s ugliest features may also be the cheapest and easiest to accomplish.

Fridley should decide to use one and only one of its east-west corridors to quickly move cars between Central Ave./MN-65 & University Ave./MN-47.  73rd Ave. might be a good candidate as it’s a road with few consumer businesses and it already has a service street separating the houses from the main traffic area.  Then other east-west STROADS can be converted back to 2-lane streets, providing the city the value it deserves. Osborne Rd. would be next on my list – which is home to a hospital, elementary school, grocery store, coffee shop, etc…