My favorite age for babies is 3-9 months. They can’t yet walk, so they’ll really only get into trouble with things in an arm’s reach. They (hopefully) sleep through the night. They can hold their head up, so I feel more comfortable man-handling them during diaper changes and play time. 3 months has also been the magic marker when my wife goes back to work. So whether I want to or not, that baby is going to be in my hands quite a bit more now.

Many have asked me how I get work done at home with the baby at home with me. For my part, I only work part-time. It would be near impossible to work a 40 hour week with a baby at home and still maintain a relationship with my wife.

For the baby’s end of the bargain, the key is sleep.

Despite what many think, babies are actually pretty easy to care for. They really only need one of three things:

By 3 months you should have an idea of what your baby’s nap schedule is like. But there always is the element of recognizing the signs of sleepiness and acting quickly. The second my daughter rubs her eyes like this, it’s time for a nap: 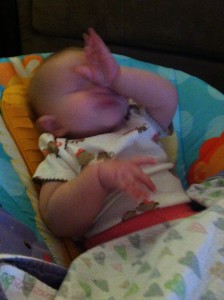 Your baby will probably continue to rub her eyes, but if you miss these cues, it will be increasingly harder to get them to take a solid nap. She will become over-tired and fussy: 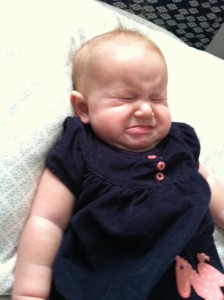 This likely means getting her to sleep might mean “rocking and holding” rather than the usual “place in crib quietly for a good nap.”

Humans sleep in cycles of around 90-100 minutes. You should be aware of what time your baby goes to sleep and what time she wakes to make sure she’s keeping to these cycles. Waking up outside of this schedule (like after 45 minutes), may mean that she’s waking up from a dream or is currently having a dream and may actually go back to sleep.

On a bad day if my baby takes two naps, that’s 3 hours of work I can get done during the day. On a “normal” day she’ll take a 1.5 hour nap and a 3 hour nap for 4.5 hours of work. Combined with a couple of evenings of work, I can pretty regularly get in 20-30 hours a week of work – but it definitely isn’t a regular 9-to-5 gig.

Embrace the (lack of) Schedule

I go with the flow and prepare myself mentally by thinking about what I’m going to work on while my baby is awake, so that when she goes to sleep I can dive right in. It’s amazing how far a little mental preparation can go when it’s time to actually work.

It may also mean that if baby naps 3 hours in the morning, you’re probably going to be working through the lunch hour. Go hungry, I promise you’ll live because if you take off time to eat now, you’ll be missing it later. Plus baby needs to eat when she wakes. You’ll have plenty of time for lunch then.

Don’t be that guy

I want to throw this out there, because I have been tempted to do this: try to work while my offspring are awake. I have never regretted forgoing a full-time job to work at home part-time with kids around. I have however, regretted trying to work while my kids are up and at-’em. Ignoring them is going to result in two things: they’re going to get hurt or into trouble, or they’re going to bother you until no end – possibly both. Either way, don’t be that guy. Interact with them when they’re awake, and work diligently while they’re asleep. You’ll both feel much better about this agreement.

This rule gets looser as kids get older but not by much. My son is content to play in his room sometimes by himself, but I make sure to stay within an earshot to make sure he’s not getting into trouble. I tend to use these times for what I call “light work” – usually stuff that is not time constrained – like email.

As your child ages into a toddler, their naps will reduce. Eventually they’ll be down to one nap a day, usually in the afternoon. My son (who also stayed at home with me as a baby) eventually would just take one nap in the afternoon at 1PM. As he got older, it increasingly went from a 3 hour nap to a 1.5 hour nap. With regular 3 hour naps, you can still get in 15 hours of work, plus evenings to get in 20 or so hours for the week.

When 1.5 hours of nap time per day becomes the norm, it’s time to consider daycare if you don’t want to offend your clients and co-workers. I was able to put my son in day care part-time (3 days a week). We still have some hang-out time, and I could get most of my work done on the days he’s gone. I suspect I’ll take the same route with my daughter.

3 thoughts on “Working from home with a baby – sleep”