It’s been a while since I’ve had to publish a “Fridley Hates Pedestrians” series. Maybe I’ve become complacent. Some road diets on county roads might actually come to fruition. In the meanwhile this happened:

It saddens and enrages me to read a story like this. This is a moment for our local government to act, and for our judicial system to stand-up.

61st St. NE in Fridley has 12-foot lanes. This is the national standard for lane width on the interstate highway (55+mph). We put that road between two schools, between the park and the community center. This is proof-positive that we care more about the vehicles going through this area more than our own children.

I’ve spoken to city staff about reducing the lane widths and adding bike lanes here and it may happen. This is really the only way to slow things down. The road needs to be narrower, or at least seem narrower (with paint). Then we need to “put stuff in the way.” Bump-outs, bollards, parked cars, and bike lanes are other great techniques for making the road busier. The more the driver must concentrate on, the slower he’ll go. It seems counter-intuitive, but the wide lanes, barren clear-zones, and open sight-lines have only made us all feel safer in our cars, which leads to driving faster.

I was recently delighted to see a Fridley planned restriping on a residential city street that included 10-foot lanes. This should be considered a new residential maximum lane width – we should go narrower for both cost and safety. But it cannot come soon enough, and it may already be too late for Duron Jr. He suffered severe brain damage from the crash.

We need to stop the victim blaming. Whether or not the student was in the crosswalk is irrelevant. It was at 3:15pm after school got out and other students were present. I went to the site of the crash less than a week later. 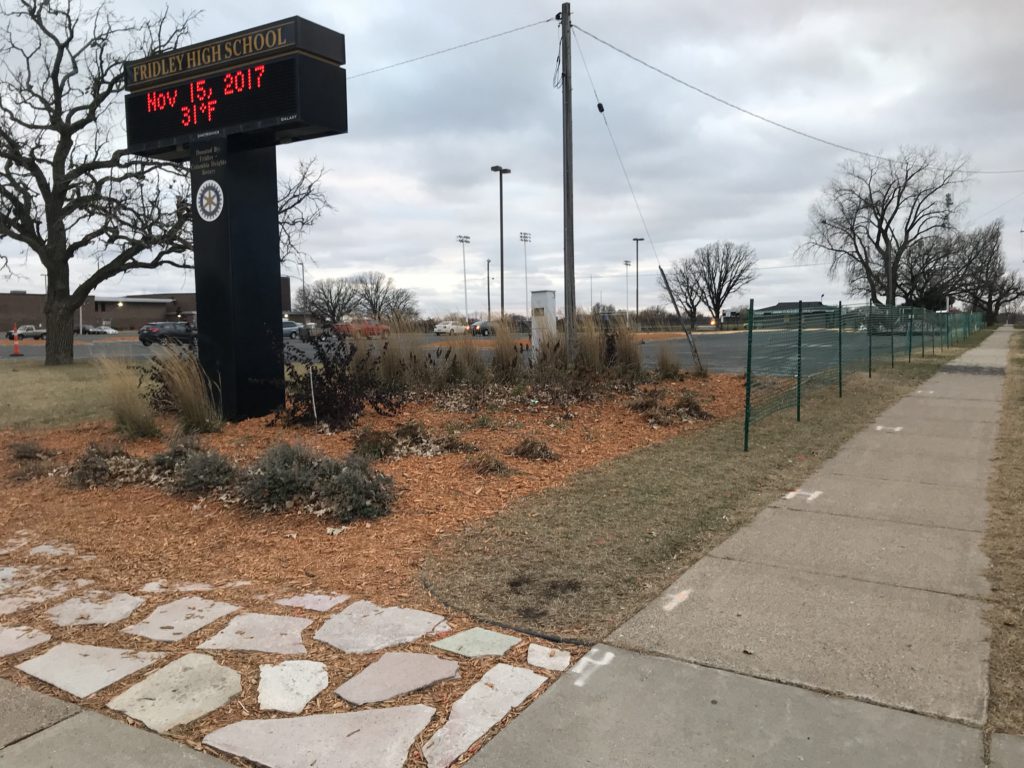 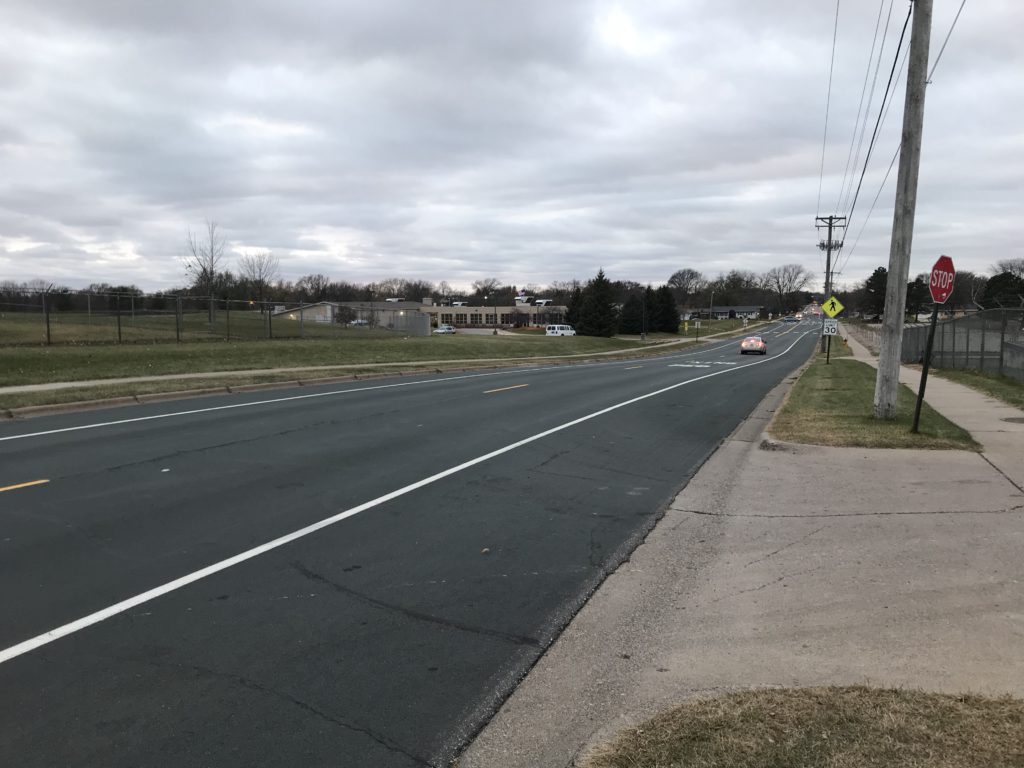 It was 4:15pm and still light out even an hour after the crash.

So what is the response? Notice the plastic green fence above by the school sign. The schools put up this temporary fence following the crash to prevent students from crossing outside of the crosswalk areas. They went so far as to block their own walkways: 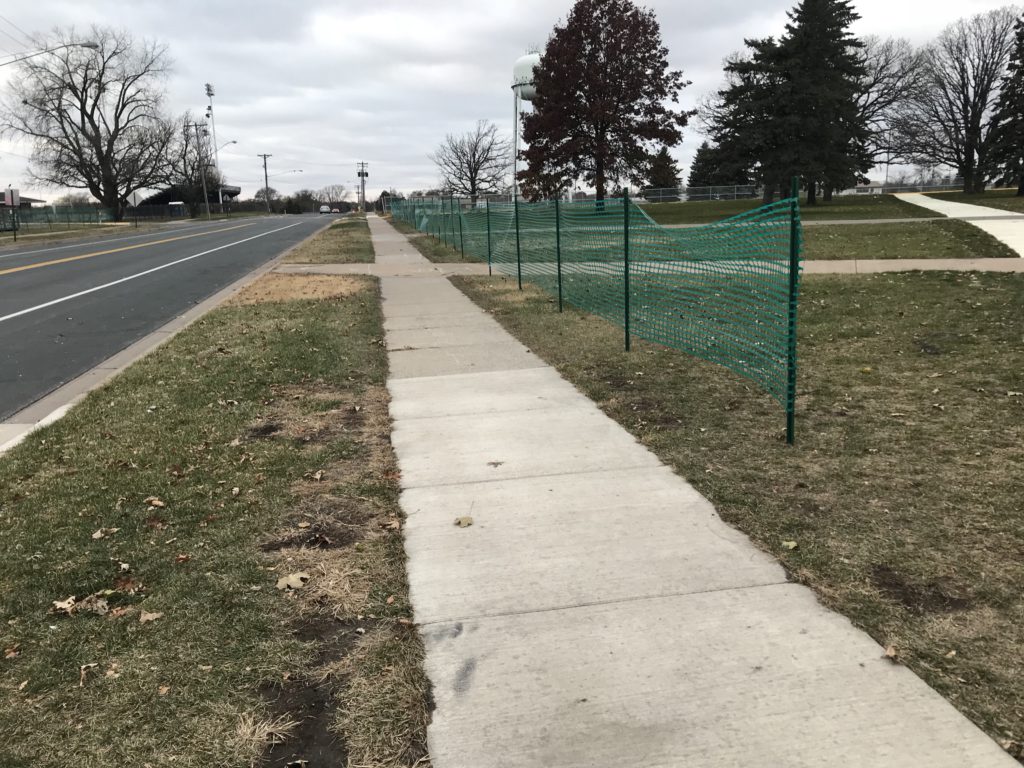 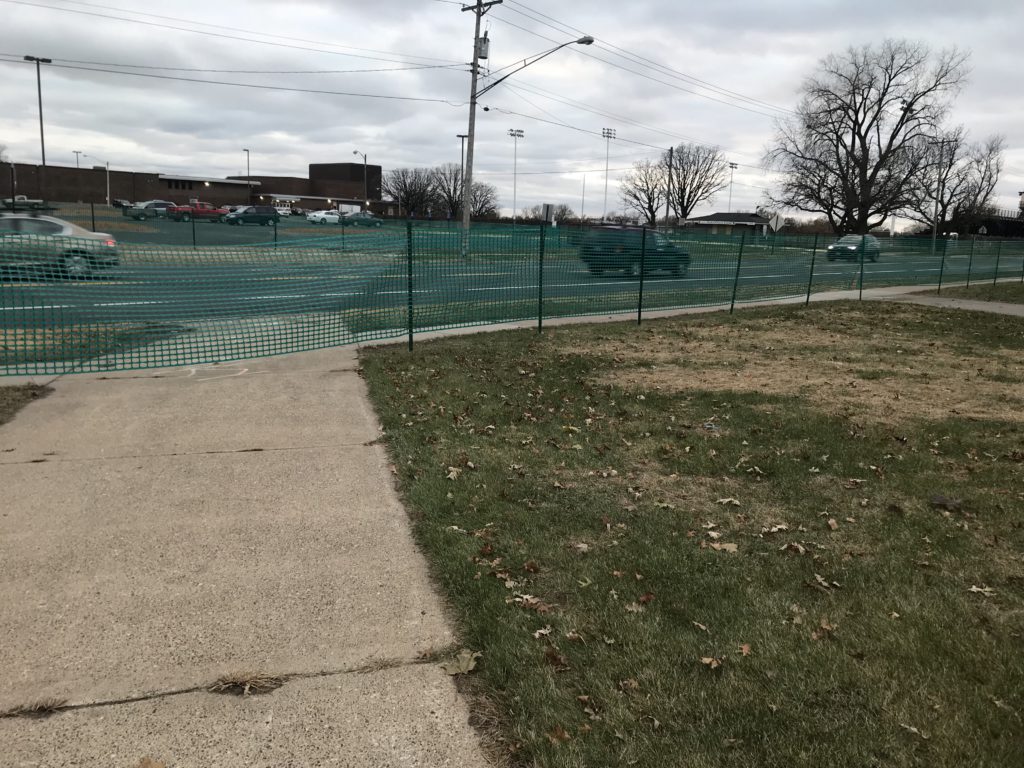 The fence is just another ugly fence that is added to the huge inventory of ugly chain-link fence here in Fridley. 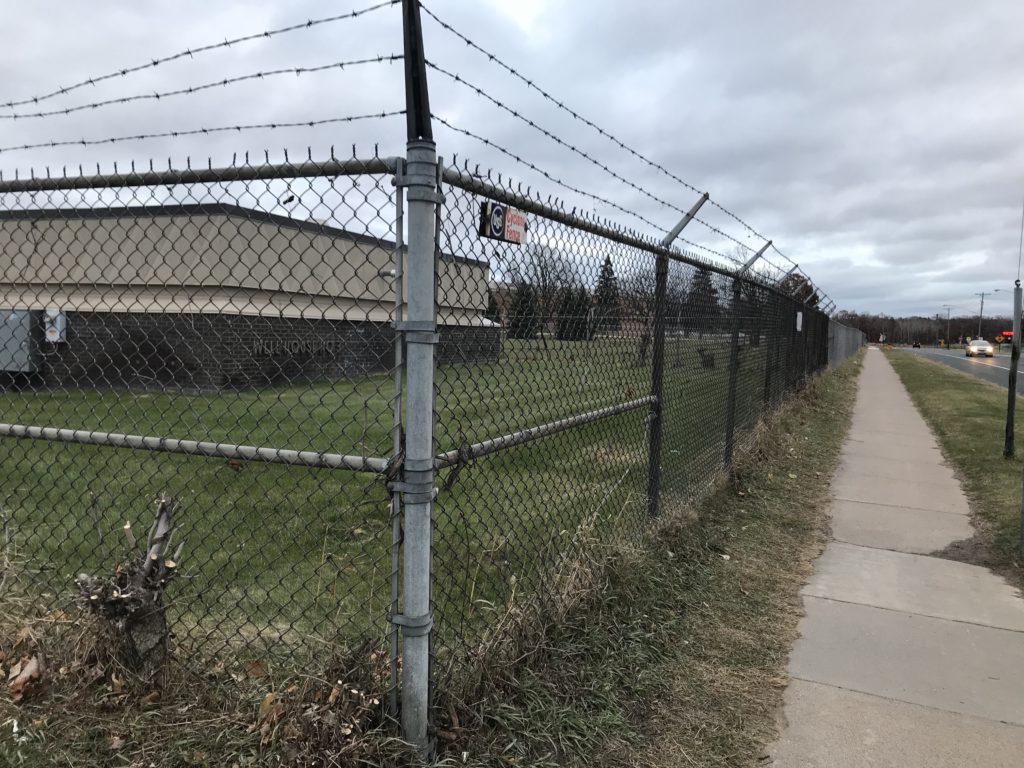 This sends the message that “Streets are for cars, kids!” Especially the way we build them. Adding a fence is just putting lipstick on this pig and going in the wrong direction. We need to slow the cars, not impede the people. Drivers go way too fast here and simple police enforcement isn’t enough when lives are at stake…

I refuse to call this incident an accident because this was no accident. It was a crash. People will only change their behavior when there are real consequences – ones beyond the traffic stop. The perfect crime right now is to kill someone with your car. In New York, only 5% of drivers involved in fatal crashes are arrested. The Dutch wrestled with this in the 1970s with a campaign called Stop de Kindermoord (Stop the child murder). The uprising transformed the nation into a bicycle and pedestrian friendly mecca. In the Netherlands the drivers are responsible for their actions; manslaughter is murder – plain and simple. Here in the USA lawyers have invented terms like involuntary manslaughter and vehicular manslaughter that are labeled negligent acts. The driver was more than negligent and should be punished the fullest extent.

Right now you can do two things to help facilitate change: