Disclaimer: this is not meant to offend any Mormons. My wife’s family is predominantly Mormon (though we are not). However, I’ve witnessed several of her cousins announce their engagements after only weeks of dating. And their wedding date was typically 3 months out from there.

I would never plan a 3 month-long engagement because I don’t think it’s enough time to plan a decent wedding and maintain your sanity. Weddings only happen once (if you do it right). Get it right the first time.

Like young, naive lovers, WordCamp organizers also need to suppress their hormones. We tend to get over-excited about WordPress – like evangelists that have been given a free podium. Pocket your emotions, and follow the advice from those who have come before you.

This post could serve both groups as a guide on how fools rush in. It’s possible to plan something this big in 3 months, but believe you-me, it is much less stress to take your time. I wish we had followed this advice – but we didn’t. In 3 months, despite the odds, we still managed to pull things off.

Let’s do a WordCamp!

Since no one had organized a WordCamp in the Twin Cities since 2010, fellow MSPWP member Kiko Doran decided he would say “I do” – just to get the ball rolling. I decided to join him. My business partner, John Hawkins, has been organizing WordCamp Las Vegas since 2009. I figured he’d be a good resource to tap for questions. Besides, how hard can it be?!?

Kiko originally chose the date: 4/20. It came with an obvious Rastafarian theme, and he even had a logo put together before we locked in a venue: 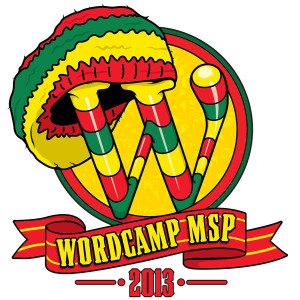 The first rule about WordCamp is that you don’t plan anything until you have a venue. Before Christmas in 2012, Kiko and I visited the downtown library and had the booking company save the date. Right before Christmas we were informed the space wasn’t available. The Friends of the Library get free reign of library rentals (as they should), and already had 4/20 wrapped up.

We quickly made an appointment with Minneapolis Community & Technical College, gracious host of the MSPWP un-conference event WordUP! They wouldn’t be able to meet until the first week of January. I wanted to keep our search momentum up, so we scheduled a visit to the University of St. Thomas (my alma-mater) around the same time.

St. Thomas’s downtown campus is great but all of the available large rooms were strangely spread out on different floors or in separate buildings. MCTC has a great space, and wanted to help sponsor the event. They weren’t available on 4/20 either, so our date had to be moved a week later to 4/27, which created scheduling challenges for my family in particular, but the show must go on!

Keep Calm and Carry On

After securing a venue things got crazy. We enlisted several people from MSPWP to help out. We let our organizing committee members run with whatever roles they felt they’d excel at. And excel they did! We had specialists for sponsors, venues, catering, and swag. Not to mention the normal kick-ass web development and design that comes with a group of WordPress geeks. I sincerely hope we can assemble a similar team next year.

We did a weekly conference call to make sure things were on track, and used Basecamp for all other communications during the week. I do believe the regular week-in week-out activity helped us keep our hormones in check.

The conference’s last day was 4/28 which was the due date of my wife’s pregnancy. Thankfully, she made it through the weekend labor-free.

If I learned anything, it would be to start planning a full year in advance. I think Kiko realized this as he started to talk to me about 2014 before the 2013 event had officially started. I like his enthusiasm but insisted that we first make it through our reboot of this conference before discussing the next year.

I hope we can continue to build long-lasting relationships so the whole community can benefit from a great event like WordCamp. One great partnership has been MCTC. They’re looking to add a WordPress course to their curriculum, and we hope that they can be a long time venue sponsor of WordCamp in the Twin Cities.

Also don’t expect that you, as an organizer, will get to enjoy the event. This same principle applies to a wedding. The best outcome you can have is that your guests enjoy themselves.