This article’s concepts should be considered independent from the layout of your business: whether it’s a sole-proprietorship, partnership, LLC, etc. We’re only talking about how you file your taxes. This article is also geared towards freelancers, subcontractors, and small companies.

For most people getting started on their own, there is the “Schedule C.” You pay your 15.3% Medicare & Social Security, plus your income tax quarterly, and hope everything works out on tax day. This is a great way for anyone to feel the “pain” of how much you actually pay in taxes. It can hurt so much that you’ll wonder if there’s a better way, and there is. Enter the S-Corp.

It stands for “Subchapter S Corporations” and is commonly referred to as a “Sub S” or “S-Corp.” I believe the “S” actually stands for “Shareholder.” It is also known as the “Newt Gingrich/John Edwards Loophole” as they helped bring it into law.

As an S-Corp, instead of filing one return, each shareholder files two: a normal W-2 and profit-share filing called a K-1. You take your total profits for the year and split it into two categories for each of these forms: Wages & Earnings (respectively). It’s up to you how to split this: 25/75, 35/65, 50/50 – and there-in lies the loophole.

You can opt to pay yourself less than “reasonable compensation” for your W-2 and save more. The IRS knows this, so as soon as you send in the S-Corp election paperwork, they’ll send you an ominous letter like this: 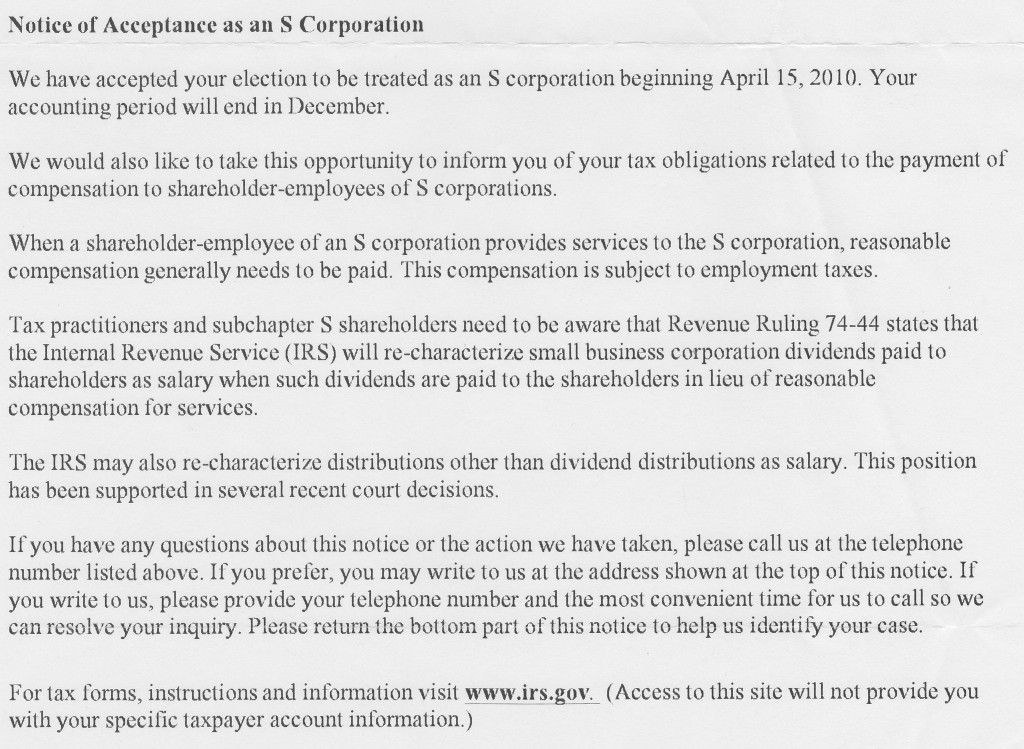 However, it’s not all doom-and-gloom. A good starting point to split wages & earnings is 50/50 and you still stand to save some money.

That leaves you with $32k rather than $29k. With tax preparation costs somewhere between $300-$700, it’s still worth it. My tax preparer, Randy Valtinson at Central Tax Service, charges $400 to do my S-Corp filing. He’s a S-Corp evangelist if I’ve ever met one. I’m glad there are tax nerds like him out there fighting the good fight for us.

Another word of advice. If you’re currently filing a Schedule C – time the switch to an S-Corp wisely. I did mine in the middle of the year – not smart. I continued to pay my quarterly taxes at my Schedule C rate and added unemployment tax payments on top of that. It was a tough year that made me doubt that the S-Corp election was worth it. I didn’t feel any relief until a full tax year later.

Learn from my mistake. Your Schedule C should cease on December 31st and your S-Corp should start on January 1st. It will make life much easier for you, your tax preparer, and your wallet.