You’ve collected enough sap, and now it’s time to boil down to syrup. The first weekend of April was it for 2014, the freeze thaw cycle is over until next year. So let’s talk about turning that sap into syrup.

First, plan on dedicating an entire day to cooking. Every year I’ve made syrup, it has taken me 12 hours from start to finish. When I make my boiling rig more efficient, I happen to get more sap and for some magic reason it always takes all day. Also, you want to boil outside. 5 Gallons of sap yields one pint of syrup. Would you be willing to dump 5 gallons of water in your kitchen?

When I started syruping I just tapped two trees and decided to do my boil on my propane grill. This is fine for a first-timer if you just want to experience the process before diving in. I put two stainless steel steam table pans on my grill: 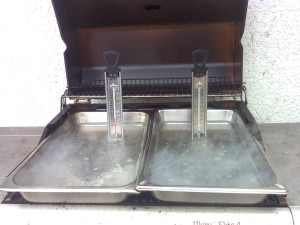 BTW, the thermometers on the trays in the above photo are totally unnecessary. I put them on for a photo-op. Accurate temperature measurement is only needed when you do the finishing. Once things were boiling I added some sap every now and then to keep the level consistent. You will go through an entire 20 lb. tank of propane this way. Either have a spare on hand or be prepared to shut everything down while you go to get a refill.

Even my first foray yielded a fair amount of tasty real maple syrup: 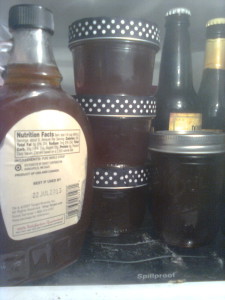 Boiling 10 (or less) gallons of sap with a 20 lb. canister of propane is OK. You’ll get your 1-2 pints of syrup for the cost of a propane cylinder or two. So you’re at about $15 per pint – about what real maple syrup sells for in the grocery store. If you want to go bigger, you’ll want to go cheaper and that means wood.

To build your fire you can get as creative as you’d like. My uncle props up his steam trays with cinder blocks and just builds a fire directly underneath. It doesn’t have to be pretty, it just has to be manageable.

I found an old barrel stove for cheap on craigslist. I cut two sections out of the top of the barrel where I could insert the stainless steel trays. In the stove, I added some fire bricks to the bottom of the barrel. I bought two cheap fireplace grates that sit against the edge of the barrel and hold the wood more in the middle of the barrel. I’ve found boiling goes faster when there’s good oxygen feeding the fire from below, and when the flames lick the bottom of the pans. Find some free wood on craigslist, preferably hardwood, but it really doesn’t matter as long as you have enough and it’s cheap or free. Here’s what it looks like in action: 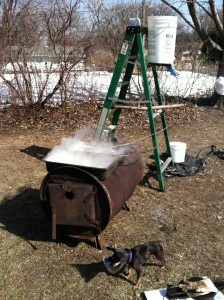 This what’s going on in this photo: I put a bottling bucket from my homebrew supplies on top of a ladder. There’s a spigot on the bucket that connects to come clear tubing. For my rig, I added a T to split the flow in two. The clear tubing then slips over some 1/4″ (outside diameter) copper tubing. Each length of copper tubing has a valve that I installed inline so I can meter the flow of sap. I usually strap the copper tubes to the ladder with twist ties or something to hold them in place. Each copper tube feeds one stainless steel tray. I fill the bottling bucket periodically using the smaller 2 gallon bucket. Once I’ve got the fire going well and the sap flow is keeping up nicely, I only have to check on things every 15-30 minutes.

Other “Where’s Waldo” items in the photo: a baby monitor (to keep the family unit in-tact) and a miniature pincer with a cone.

Whether you’re using propane or wood, once you’ve boiled your sap down to a point where it will all fit in one normal-sized kitchen cooking vessel, it’s time to go inside. This is when an accurate candy thermometer is necessary. The syrup is done when it reaches 7°F above boiling. At sea level that would be 219°F. Here in Minnesota, I let mine go to 221°F for a little extra insurance. You also want to stir the syrup when you think it’s almost done – there may be a hot spot in the pot. You want to make sure all of the syrup has reached the desired temperature. 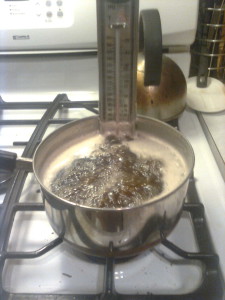 Put your finished syrup into jars while it’s hot. Strain the syrup through a filter to remove any particulates. I got a cone filter from Sugar Bush Supply which is specifically for syrup, but you could use a few layers of cheese cloth. The hot syrup will seal the lids shut and you can then store them at room temperature for a year (or longer). Real maple syrup must be refrigerated after opening.

5 thoughts on “Home Made Maple Syrup Part 2 – The Cook”