I went to syruping demonstration a couple years back put on by the Minnesota DNR. Syruping is an age old tradition, so there’s nothing really new here, In fact most can be gleaned from the handout I received at the demonstration. I just wanted to document it for someone looking to get started.

During a year with “normal” Minnesota weather, you would want to start gathering sap for syrup around Valentines day. But this year was extra cold, and we didn’t start having good daytime thaws until March.

You could still start now, you haven’t been missing out on too much sap production (from my standpoint). Here’s what you need:

It probably goes without saying, but you need to live in an area with a 4-season climate to collect sap for syrup. When it is below 32°F outside, the sap is stored in the roots of the tree. When it thaws, the sap moves up the tree trunk and into the branches. Several consecutive days where it is below 32°F at night and above 32°F during the day will create a pumping action from the roots to the branches for the best sap yield.

If you don’t know which trees are maples and which ones aren’t, you might wait to start this adventure next season. It is easy to identify maples when they are in full leaf, but unless you know the bark well, I wouldn’t suggest tapping any trees of unknown species.

Trees – you don’t need to live out in the country to make maple syrup. Even if you only have one or two productive trees, they can yield enough sap for a beginner to get started. My first year I only tapped two trees and I did it late. I got 5 gallons of sap out of each tree, which each boiled down to a pint. Those two pints of syrup lasted my family until August (5 months).

The trees you tap should be at least 10″ in diameter. By measuring the circumference, you can determine the diameter.

Taps – You can purchase these at farm supply stores such as Fleet Farm.

Tubing – You can get this at a hardware store or even a pet shop with aquarium tubing. Bring your taps to size it up.

Buckets – I specifically got 2 gallon plastic collection buckets at Home Depot. They’re for making custom paint mixes. They’re just the right size to hang on the taps. You’ll want bigger buckets to move the sap to at the end of the day. I keep a couple 5 gallon buckets in a garage fridge. My uncle that lives in the country taps about a dozen trees and found some 55-gallon plastic barrels on craigslist to store his sap.

Hammer the tap into the hole and add a length of tubing. 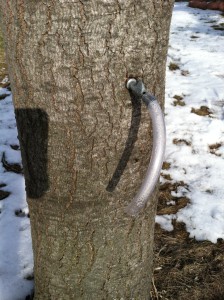 In the lid of each of my collection buckets, I drilled a hole where the collection tube could go. When I hang the buckets, I only snap down one side of the lid (opposite the hole). This is because the lids are f#*king hard to fully snap down. It also creates a situation where if rainwater were to pool on the lid, it wouldn’t go into the bucket. 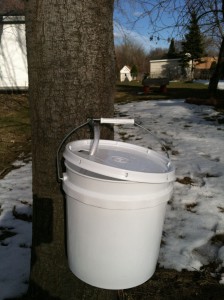 To really prevent rainwater from getting into the collection buckets, I punch a hole in a plastic bag and put one over each tap. 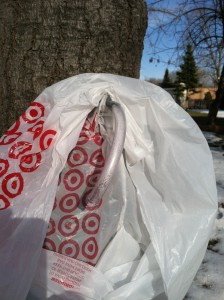 Then you can hang the bucket and put the bag over it and have a somewhat weather-proof setup. Watch out for nosy squirrels or windy days, they may knock your bucket and bags down. 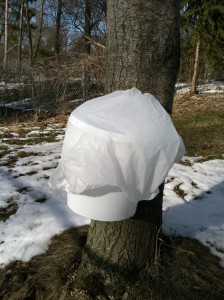 I’ll cover the boil-down later, but will warn that there is a time limit on freshness in regards to color and flavor. The document I referenced gives about 5 days of storage leeway: 2-3 days in the collection bucket, plus an additional 2 days in refrigerator temperatures before boiling. The longer you store it before the boil, the darker the syrup will be.

My experience has been that you can keep fresh sap in the fridge for about 2 weeks without ill effects besides a darker syrup. I kept some sap in the fridge last year for 3-4 weeks, and it boiled down to a strangely sour syrup – inedible! Better to do several small boils during the syrup season than try to do a big one at the end.