Going to get some of these to do a review: Thule Commuter Pannier Set http://t.co/6liw3aLNLa @Commute_by_Bike

A year and a half after I purchased these bags, it’s time for a review. You can’t buy them anymore, but this is more of a review of panniers in general. I used to ride with a backpack. It works (and is good for laptop shock absorption), but be prepared to have an instantly sweaty back. I can’t walk up a flight of stairs with a backpack on and not start to feel damp 🙂  Getting the bag off of my back and on to the rack on my bike is a huge win for comfort and convenience.

These Thule bags were a steal at $120 for the pair. Most decent panniers cost this much just for one! They were a deal because Thule discontinued this model. The replacement bag is a “unidirectional” one that can go on either the left or right side of the bike rack, whereas the ones I got are specifically made for left and right sides – they are slightly narrower towards the front of the bike.

The Thule bags have a pretty rad feature where you can “flip” and hide the rack attachment hardware and carry it as a normal-looking handbag, or add the included strap and wear it as a shoulder bag or backpack.

With my new job, I use one everyday to carry my laptop to work. The other bag, sadly sits idle most of the time as I only need one for what I’m carrying. They came as a pair and at the time of purchase I was thinking about all of the epic bike adventures I’d be going on, with both bags packed to the hilt. Carry all the things!

I will use both for something like another bike camping trip, but for day-to-day commuting, just one is great.

I have racks on both my road bike and my mountain bike (which is really more of a kid-hauler than a mountain bike). I like my Topeak racks because they have a secure mounting system and Topeak offers several attachments. The Thule panniers fit nicely on both of my racks despite their differing thickness of tubing. You cannot, however, attach a top mounted Topeak trunk bag and the panniers on the side at the same time – they interfere with each other. I plan on devising something that can go on the top while both panniers are on with some spare parts, but that will have to wait for later.

100 years ago, when spinning hard drives in laptops were the norm, there were several creative ways to carry your laptop in a pannier. Solutions from suspension to excess padding were employed to ensure you didn’t jar the hard drive beyond its shock tolerance. I’ve gone the other way and simply purchased a laptop with a solid-state drive instead of a spinning disk. I lined the bottom of my panniers with a bit of bubble-wrap left over from a mailer, just to prevent any dents when I’m doing sweet jumps.

While the bags aren’t waterproof they come with a waterproof cover. I’ve only used the cover once (in a total downpour). Normally I can just ride home quickly in a sprinkle, because it’s only one mile to work 😎 The covers stow inside each bag and are easily added: 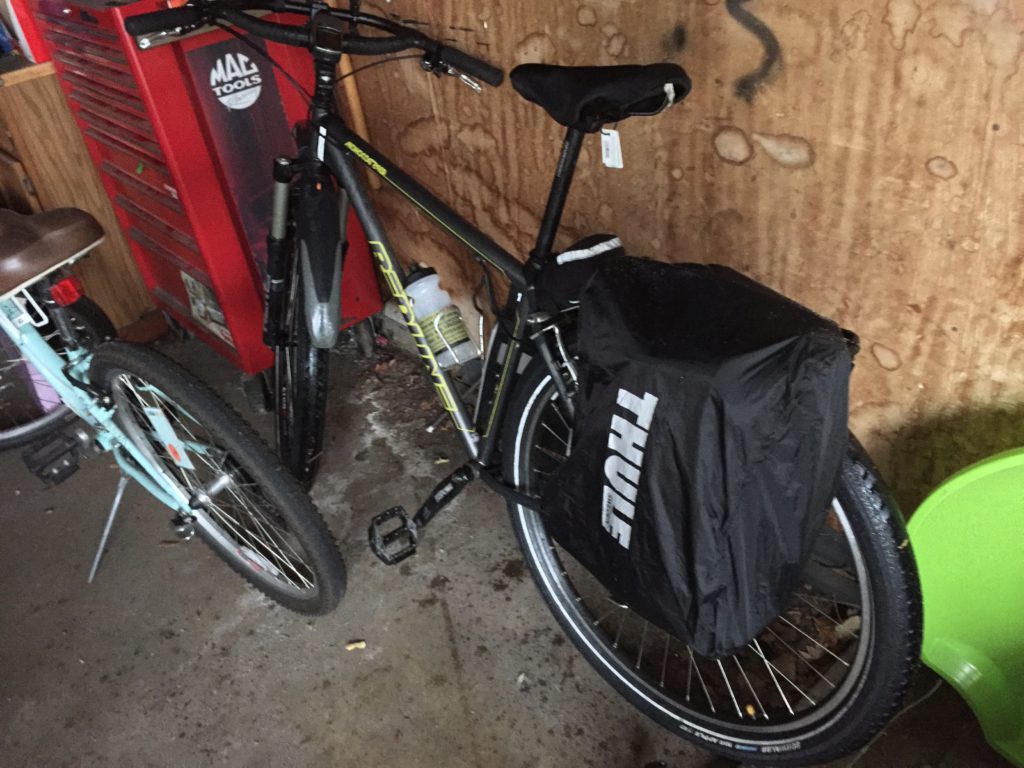