What the heck is an S24O? It’s an acronym invented by famed Rivendell Bicycle builder Grant Peterson. It stands for Sub-24 Hour Overnight and he writes about it in his book “Just Ride”. Put simply, it’s a bike overnight where you’re gone for less than 24 hours. Since it’s short and you travel by bike, it limits the amount of “crap” you can bring.

I (possibly foolishly) convinced my family to embark on a 16 mile bike ride to the nearest campground, at Rice Creek Chain of Lakes Park Preserve. It wasn’t foolish because we lacked the muscle or equipment to undertake this endeavor, it was foolish for other reasons…

A month before we embarked, I scoped out the route. This was good because the trails in Anoka County are extremely poorly marked. I got lost no less than 5 times. Plus I found two shortcuts that weren’t offered by Google Maps which would shorten the distance.

I made a time-lapse of my scouting trip using my GoPro:

We chose to actually go from Friday to Saturday – so we could have a full day of recovery before work on Monday. One thing about leaving early afternoon Friday that I didn’t anticipate was rush hour traffic – I work from home so I’ve purposely forgotten most of the drudgery of “regular” daily life. Traffic wasn’t especially bad, but it felt like everyone behind the wheel had some pent up angst.

An old bike-commuting coworker once told me that morning traffic is much more agreeable than afternoon traffic. People can use you as an excuse to be late to work. They’ll drive politely, and then can twist the blame if their boss asks. “I was late because of bicyclists.” But in the afternoon they need to get home, or else.

So we got buzzed by a couple of jerks that needed to get on the freeway ASAP, only to crawl along the interstate at the beginning of rush hour. Meanwhile, crossing the interstate meant we were onto the trail, so long suckers!

With the route set, I knew to allot around 2 hours for riding (plus breaks) so we could schedule accordingly. But what to bring? Some things were obvious, but what do you omit and what are must-haves? Here is what our packing list looked like:

We identified a couple of things that we need to better the trip next time. One was a lantern for hanging out at the picnic table. My bike light is bright, almost too bright. It was sort of like being in the interrogation room with it shining right at you.

Also, a camp-dedicated cooking pot would be nice. Our normal kitchen one went home looking like it had endured the worst, now scorched and soot-covered.

But that’s the best part of the S24O – if you forgot something, you’ll live. You can remember it for next time and not worry because you’re there for less than a day.

All of this stuff fit pretty easily with two kids in our Chariot Trailer and our Little Red (Auxiliary) Trailer: 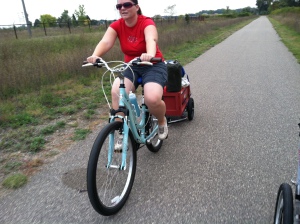 Our S24O looks a lot like car camping, minus the car: 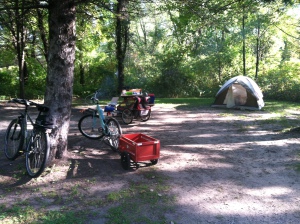 My wife warned me about camping with a 16 month old. We had just come off a month-long stint of Jessi’s mom staying with us and helping out with the kids. Grandma had been sharing a room with our 16 month old Marlo, and they had gotten into a good nighttime routine with minimal interruptions.

I assumed her sleeping habit had gotten to a point where Marlo would go to sleep when tired, and she’d respect everyone else in the tent, just like she did when she was in her crib and grandma was in her bed in the same room.

Boy was I wrong.

Jessi went to bed with the baby around 8PM. But Marlo had no intentions of sleeping. The sheer thought of everyone in this nylon fabric box sent her into a frenzy. She scooted and climbed all over everyone with laughter and cheers. At several points no one could contain their own laughter because she was laughing and clapping joyously. This lasted for 3 HOURS. 11PM was the magic hour when laughter turned to tears, and a few minutes being held by mom turned into everyone finally getting some rest.

But the sleep was not good, because I have a 2-man tent and we were 4 – two adults and two of the wildest, tossing-est, turning-est children ever. Then once we did fall asleep we were awoken by the sounds of a meddling raccoon. That bastard stole the last of the s’mores! Judging by his heft, he didn’t need any more s’mores 🙂

Turns out both my parents and Jessi’s parents have similar horror stories of going camping with children of a similar age. Some of those children may have been me. But we didn’t hear these stories until we returned and told how our own trip unraveled. I guess the next generation is doomed to repeat the same mistakes.

Even though some parts weren’t “fun,” we’ll surely remember it forever, and always tell the tale. As Grant Peterson put it:

If they hate it, it’s only a night, and they’ll still be proud as they brag to their friends how much they hated it, and they’ll be secretly glad they did it.