In the summer of 2014 I became a member of Strong Towns, an organization that increasingly aligns with how I feel about the places we create, and the money we spend to do so. At the National Gathering, another member asked me what drew me to Strong Towns. The best way I could describe it was that it let’s me “Have my cake and eat it too.”

The Strong Towns message dispenses with the political polarization to get to the heart of the matter. Too long I’ve felt that discussions about walk-ability and bike-ability assume the role of the democrat, while prudent spending rhetoric aligns only with republicans. But taking sides politically, is not useful – especially in regards to local politics which center mostly around land use. In the same vein, it’s better that we get to know our neighbors, so when we disagree on civic issues, we can agree to disagree in a courteous way.

The latest Strong Towns challenge is to deliver goodies to your neighbors. Would this be difficult or awkward for you to do?

My neighbor on one side is darling elderly woman that has lived in Fridley since 1963. She witnessed first hand the tornado of 1965. She agrees with me on our latest civic uproar – the potential for trash hauling consolidation. We agree that 9 trucks coming through every Wednesday is a little ridiculous. She still drives her car (which scares me to death), but only during daylight hours. She tells tales of how she used to take her kids to Fridley’s old one-room schoolhouse on the handlebar of her bicycle.

My other neighbor is a musician, a fantastically talented one at that. I’ve seen him play piano in a song he’s never heard by following the guitarist’s chord changes. He’d claim he fumbled through it, but I’d be none the wiser. He thinks consolidating garbage collection will become “crony capitalism” between the city and their favorite hauler – which I also hold concerns about. He disagrees with my plan to build a garden path through my yard to the empty lot behind my house: 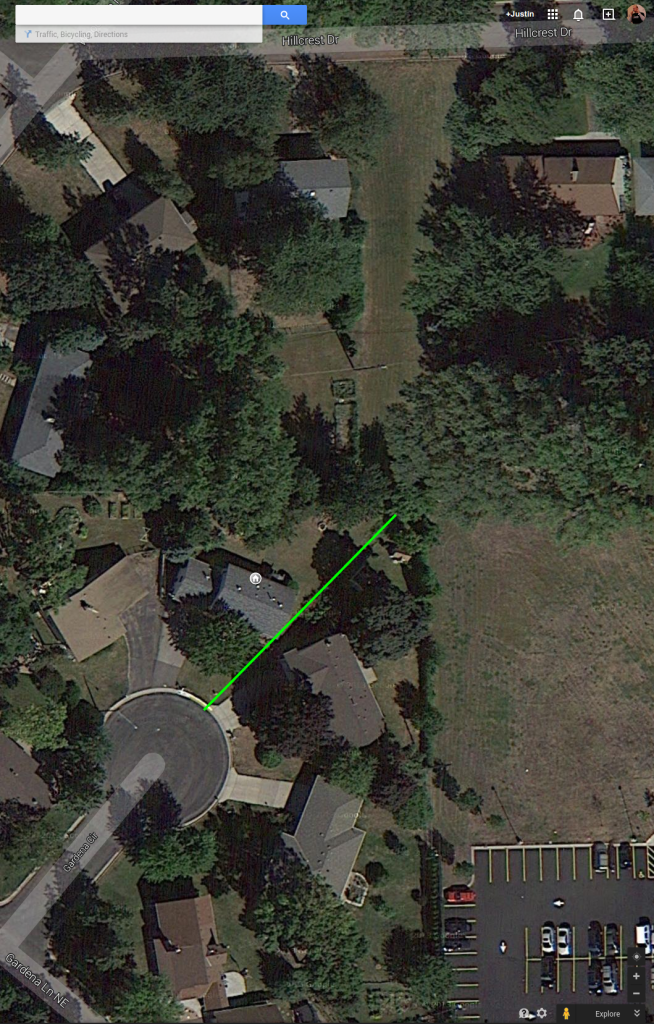 That’s OK, we can agree to disagree. Even if the path is not a truly public amenity, I think it will be fun for the neighborhood kids to cut through to go sledding, or to fly kites or to generally run around.

Getting to know your neighbors

I’ve lived in 2 apartments, 2 duplexes, and 3 single family homes since I graduated from college in 1999. I’ve never known my neighbors as well as I do here. They’re a great group of people that I try to know better than the typical one-day-a-year “night to unite” – although we have a pretty good party that night too 🙂

I don’t know why I know my neighbors now more than in the past, but I can tell you it makes life much more pleasant. Here are some tips and tools I can offer to those seeking better neighborhood communion.

For the facebook lovers out there, there is nextdoor.com. It’s a low barrier way to reach out to neighbors without leaving your own home. In Fridley the police are using it for public notices, so that has spurred faster adoption.

But neighborhoods are best when experienced in meat space. One of the high-ups on my list of books to read is The Art of Neighboring. It has advice from civic leaders and clergymen who offer several tips on how to be a good neighbor without coming off as a weirdo. I have more than two neighbors (duh) and I intend to put this book into action to meet them.

So I’m going to send my neighbors a batch of my dad’s famous caramel corn.

Pop your corn and set aside in a large plastic bowl.

In a 13″ x 9″ glass dish place sugar, corn syrup, butter and salt. Cook in microwave 1 minute and stir, do this at 1 minute intervals until it boils. After it boils, stir and cook 1.5 minutes. Immediately remove dish, add baking soda, and stir. This will cause the mixture to foam.

Add hot caramel mixture over popcorn and stir in. Stir until mixture starts to stiffen. Place bowl in microwave and cook 20 seconds then stir. Do this at 20 second intervals until fully coated (3x or 1 minute total is normal).

Spread on wax paper and allow to cool. Enjoy!