Today I’m going to be unboxing the new Dell XPS Developer Edition for 2019. I just got this in the mail – super excited. I believe the number is 7390. Check it out!

Alright so here it is. I actually found this laptop from listening to the linux4everyone podcast. That’s Linux, the number-four (4), and everyone. The episode that I heard, the host Jason was interviewing a guy named Barton George who works at Dell. He actually heads up a team called project Sputnik and they handle all of the hardware that Dell ships with Linux pre-installed. He mentioned quite a few things about how they don’t add any hardware that isn’t well supported.

This thing is taped quite quite nicely. As you can see it’s got the battery warning on there – still got the packaging slip on there. You guys are seeing this for the first time, just as I am. Let’s see what we got — do not cut yourself 😬 🔪

Let’s take a look in here. Power cord, going to need that. Oh cool, a USB to – USB C to USB adapter. It will be good to at least get some stuff working right away. And the power adapter.

A couple foam pieces, we’ll get those out of the way. And the laptop… Cool.

I went to the site, and when the i5 came out I was actually kind of disappointed. Because the RAM spec on it was 8 gigs of memory and it wasn’t upgradable, which seemed kind of weird to me because my ThinkPad – which is from 2014 – had 8 gigs memory on it. I’m like – I know a lot of people out there looking looking to upgrade – myself included.

So I waited like a week or two and went back. And the i7s had come out, and they were 16 gigs of RAM. So RAM is definitely a buy time decision, because a lot of manufacturers are soldering the RAM onto the boards, and you really don’t have a choice of upgrading.

Out of the inside box

OK cool, so this has got a little tab in the back to pull it out of the box. We’ve got an instruction manual in here. I don’t think there’s anything underneath this. No, nothing there, set that aside. Yadda, yadda, health and safety. XPS – a little brochure with where to plug stuff in. Plug it in to the left – got it. OK cool, we’ll plug it into the left.

Yeah, one of the most satisfying things is taking off this plastic. It seems kind of like a sleeve so I think I can just… Nope, never mind, do it like that.

Let’s take a look at this thing here. So we’ve got ports on the side, let’s see. So this side – I think this is the micro SD here. This is the battery gauge here (8), it comes with a full charge or, two-thirds. And then two Thunderbolt or USB-C (6), one of which I think is Thunderbolt, and then I think that is for locking (5). 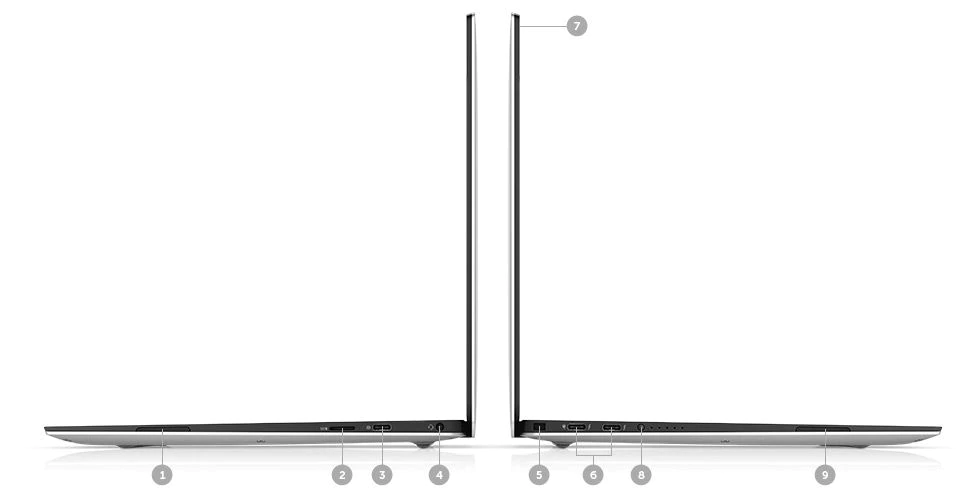 Let’s take a look. Alright, plug this guy in, let’s check it out. Looking good so far. I like this carbon fiber overlay on the front.

So this being the developer edition, I’m obviously not going to go into detail about how good the graphics are – although I did get the upgraded screen. I’ve been using Linux for 20 years, and I’ve been doing web development for 10 (actually 15). I’ve also been working remotely for 10 years – so things I’m interested in are… Like the keyboard, the battery life, the track-pad. The screen – and while I enjoy the high resolution – it’s also a touch screen but I’m probably not going to be using that feature.

Also the camera which is now up at the top. I use the camera every day to communicate with my co-workers
working remotely, so the “nose cam” that used to be like down here or down here would be a deal killer for me. I definitely wouldn’t be buying it if it still had that setup.

Oh I almost forgot! One of the most important features. Before we fire it up, I got these cool little stickers from ThinkPenguin.com. Put that guy right there – good to go, before we even turn it on.

Later on I’ll be doing probably a review of some of the – I’m going to buy a USB-C multi-function adapter to
connect my external monitor. Normally I use wired Ethernet, obviously this doesn’t have ports for those like my old ThinkPad. But I might be reviewing those later.

A familiar sight. This is exciting, I don’t have to delete Windows and kind of start over – straight into Ubuntu, cool. Some custom Dell verbiage here – who reads all that stuff? Keyboard: US. I do want to connect.

Yeah, this screen looks awesome, and look at how close to the edge it goes. I know that’s one of their big selling things. (Laughing) oh, touch screen! Like I said, I’m probably not gonna use it but it’s there.

Where am I, Chicago? Close enough. I’m just gonna call this (hostname) XPS13 today. (user) justin, (password) pick something easy for now. Cool, oh look at this, this is great: save recovery media to flash drive. Awesome, I should be looking for a flash drive while this is going. I’ll be right back.

Look what I found: my old T440s Windows 8 recovery disk. I would use this but I think I’m going to try to… When I sell my laptop I might want to use this. So I’ve found another one that’s labeled “Ubuntu latest.” Hopefully we can format this and use it. Now’s the test where I grab this USB dongle, and put this guy in here.

Device is not large enough to hold this image. OK 🙁 Let’s see if we can go to terminal, like that? We could do something in a shell somewhere else.

Holy cow that is the tiniest. That is crazy, can you guys see that?!? 🕵 Wow! That is the tiniest thing ever (laughing). Is this thing mounted? I need a magnifying glass to see this stuff here. 🔍 It is not mounted.

I think the answer is going to be: I need a bigger flash drive because this is not going to be big enough. You know it’d be helpful if it told you how big it needed to be. One second let me see if I can find something.

OK, found a new one. Let’s see if this guy is big enough. Yes, do it. Yes all data will be lost, there ain’t nothing on it.

So far I really like the track-pad, nice and smooth. The mouse is definitely not fast enough, but I’ll change that in the settings. But it feels great. And the only thing I’m not sure about is this line here: does that mean that this is going to be right-click or left-click? Hopefully that’s configurable.

Keyboard feels really good too so far. Good size keys, kind of the same as my old ThinkPad. Which actually, I’ll grab real quick and do a quick size comparison. Because this is a 13″ and my old ThinkPad T440 is a 14 inch laptop. So while it seems like the screen is getting smaller, it’s also getting much higher resolution and the viewing angle looks pretty superb as well. Let me go grab my ThinkPad while it’s writing.

And we’re done! Cool, installation is complete. All right, quit. That thing continues to do whatever remainder of installation it needs to.

So here’s my ThinkPad, and when this is done maybe we’ll just power it off and and take a look at the two size differences. So here’s a quick size comparison to my old ThinkPad. It’s a T440s, well used. This thing’s from 2014, so it’s feeling its age.

This thing (XPS) could kind of sit in its lap. But the keys are actually pretty similar in size I’d say. You know, one of the reasons I got the T440 was because the keyboard got such good reviews. But so far I’ve been really liking this one too – time will tell.

You kind of look at it and it’s a little bit thinner end to end. But the key size is still very generous on this one. So the screen is, actually when you look at it with how close it goes to the edge, it’s really not that much smaller than this one.