Touring a city by bicycle is the best way to get to know it. You can move quickly from place to place, and stop easily along the way. You’re never too isolated from your surroundings to enjoy any sights or smells along the way.

I’ve made it a point to book a bicycle tour in new cities I’ve visited, and you’d probably be surprised which ones were the best. That is not to say I’ve ever had a bad bicycle tour experience, but some are just better than others.

This bike tour is my favorite for a number of reasons. I was able to share the experience with my then 10-month old son Jules. Even though he doesn’t remember it, he was a great passenger. We were also able to eat what I can only describe as life changing french fries during the tour.

Our tour guide spoke perfect english – because she was from Ohio. She was none-the-less very knowledgable about Brussels and its amenities. We stopped by several landmarks including the European Committee of the Regions (where the European Union meets), mannequin pis, and several monuments.

But the best stop was at a market in Leopold Park that had a permanent french fry stand called Maison Antonie. The fries were cooked in lard which was so clear it simply looked like boiling water. They had at least 20 different sauces – ketchups, mustards, hot sauces, barbecue and several variations or each. 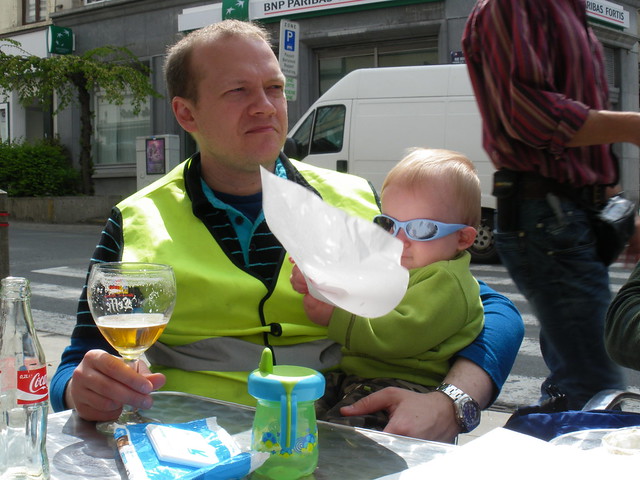 The Toronto bike tour was great because of the diverse neighborhoods. Each of them seemed to have a specialty cuisine whether it was a bagel shop or a sushi shop. Our tour guide was very knowledgable, and she offered her favorites for each neighborhood.

I put Portland last on the list not because it wasn’t great. It was a very good tour. But perhaps with Portland being the cycling mecca of the United States, I had set expectations too high.

It was a good tour, and I’d easily recommend it to anyone visiting. Our tour-guide was very knowledgeable and knew the city inside and out. They even gave us maps with a few of their favorite spots highlighted.

I wished we had made a quick stop along the tour for a beer or some french fries. Maybe in Portland’s case it should have been a donut instead – our guide suggested Blue Star Donuts over the more touristy Voodoo Donuts. It’s all probably my mistake because I didn’t instead sign up for the beer or foodie tour.

But maybe it is just Portland itself. Fun, but predictable. Even being naughty here is legal. Kind of homogeneous. Maybe it’s just me.

Still, it’s the best way to get a feel for the city.