In 2014 I had a personal ban on Strava. Not because Strava has prompted some people to do stupid things (it has), but because they shut down a perfectly working API and left all of their users (and 3rd party developers such as myself) hanging while they developed their “Version 3” API.

As one of the developers of a WordPress plugin for Strava, all work was effectively abandoned.

I did enjoy using Strava not so much for the competitive-ness, but as a general recording keeping spot for all of my miles. While I understand that competition is the main selling point, it’s ancillary to me. I just like that I can see what my cycling friends are also doing.

In the wake of the API shutdown, I perused the other options out there. Since I had a Garmin GPS, I thought I’d check out their prospects to see if they “get it.” They supposedly had an API for Garmin Connect so I inquired with this email:

I was looking for details about the Garmin Connect Web Services API. All it says is “coming soon” and the developer forum seems to be unmoderated spam:https://forums.garmin.com/forumdisplay.php?54-Garmin-Developer-Information I am an author of the Strava plugin for WordPress – as you may know Strava recently changed it’s API access so many apps and plugins no longer function. Now is the time for disruption! Publishing the Garmin Connect API would be a great way to get some momentum behind the project and get users who are fed up with Strava to come over to Garmin Connect.

In the meanwhile, I tried out Garmin Connect by uploading a track. One of the niceties about Strava (besides the fact that people are actually using it) is that they remove the non-moving time. Whether I’m at a stoplight or grabbing lunch, I can view a ride as just the moving portion. Garmin awkwardly leaves it in, which can dishearten you when you look at the average speed: 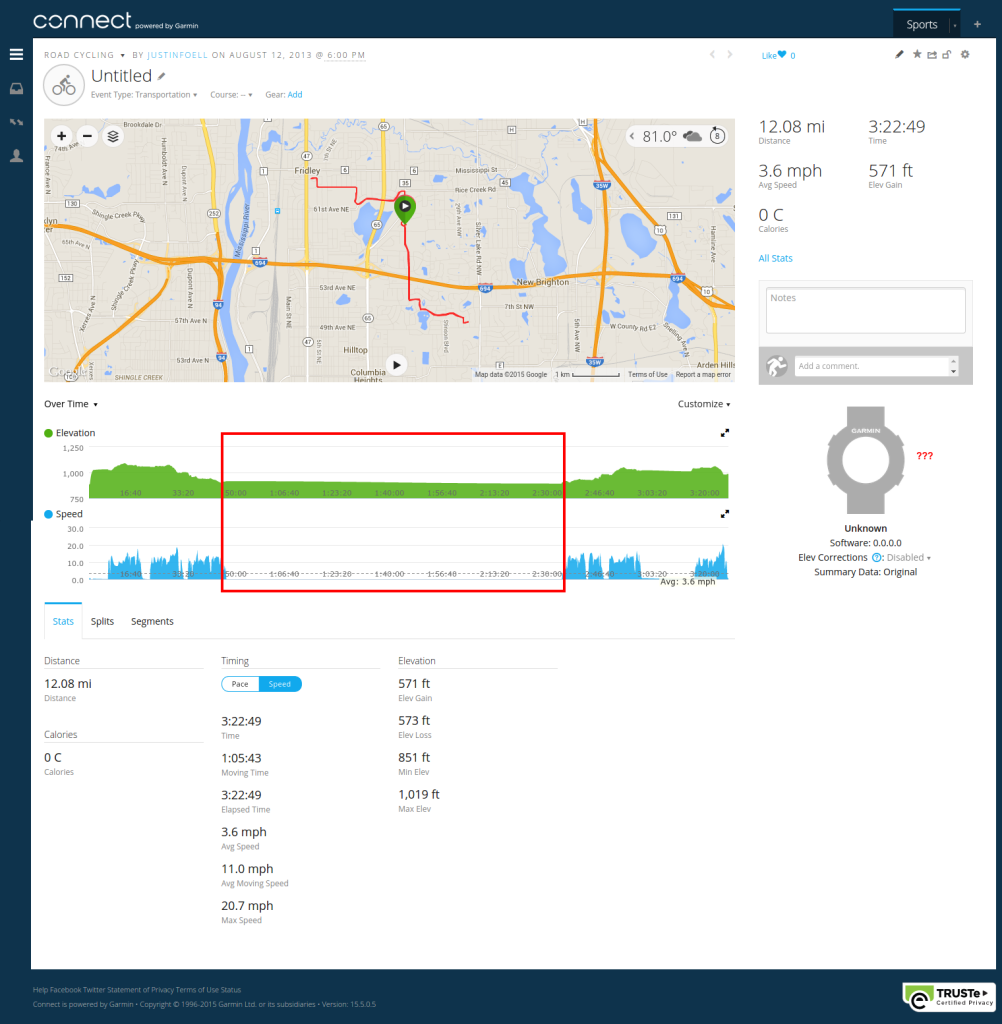 Also, they seem to be heavily invested in relying on Garmin devices (see the watch icon near the question marks above) – and only the latest ones. Lastly, Strava can calculate the calories burned based on my weight and my bike’s weight (part of my profile), measured against the speed and profile of the GPS track.

After the less-than-stellar first-time user experience, I heard back from Garmin Support:

In the forum, I also got a response from another user who put it bluntly:

Many are those who have contacted Garmin and have not responded.

That project is dead.

Strangely, Garmin is still pushing their connect service hard, along with their hardware of course:

The Return of the Strava API

Once the V3 API became available, support tickets regarding WP-Strava started coming in. I didn’t even know that the API had gone public. If there was some sort of communication effort on Strava’s behalf, they failed because I missed it. But now work has slowly come back to life with the WP-Strava project. And now I’m slowly filling in all my rides from 2014 that I recorded with my GPS, but never uploaded to Strava.

I used to use MapSource (an old unsupported Windows program by Garmin) to capture my GPS tracks and save them as GPX files for Strava. The state of support for my Garmin Vista HCx was changing in Linux itself. The old garmin_gps driver which acted as an old school serial (COM) port worked with Wine/MapSource, but not with the newer direct USB driver. It was time to find something new, preferably native to Ubuntu.

QLandkarte GT is a somewhat clunky, but usable solution. Actually, when you go to the QLandkarte GT website there’s an announcement about a successor program called QMapShack, but the latest version included in Ubuntu 15.04 wasn’t very full featured – so it will have to wait. I’ve learned to use QLandkarte quickly despite its clunkiness, so I thought I’d share my workflow.

I won’t cover downloading tracks from the Garmin, as it was all very easy. Just remember to install the qlandkartegt-garmin package in Ubuntu to get Garmin support in QLandkarte GT.

As you can see QLandkarte GT’s color scheme doesn’t exactly jive with Ubuntu’s default color scheme. In the upper left there’s a persistent context menu which may be useful, but the only thing that’s really visible are the icons. The only ones I use regularly are from the Tracks section of the application: the “Join” action (green plus icon) and the “Download” action (blue down arrow icon). 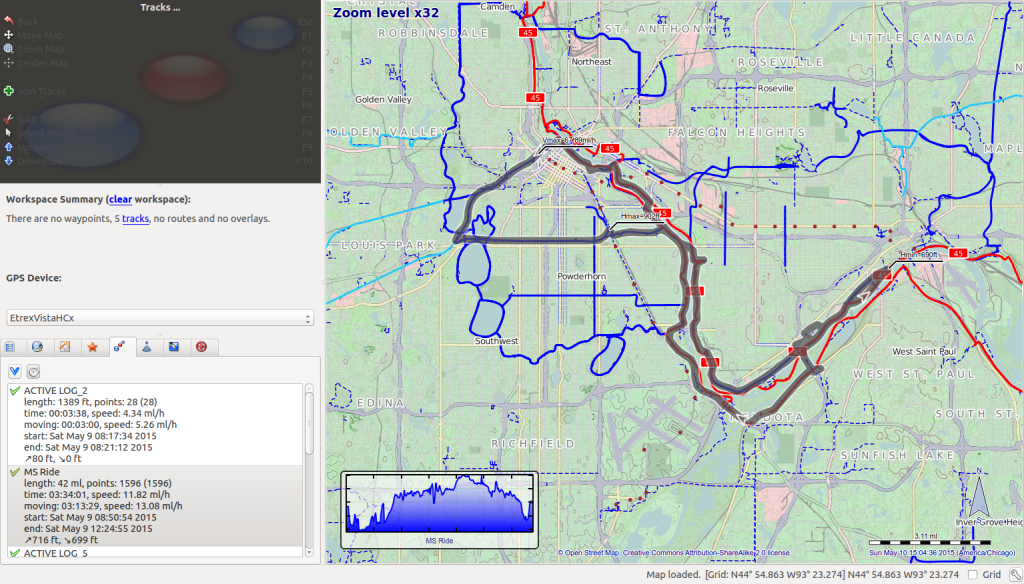 Switch to the tracks tab and then download tracks from the GPS. Then you can edit individual tracks by right clicking and choosing “Edit…”: 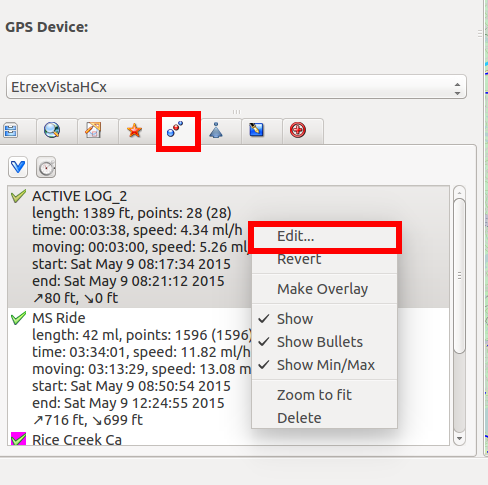 Once the track edit screen is open you can change the name of the track, and remove (hide) any points from your track that may be erroneous: 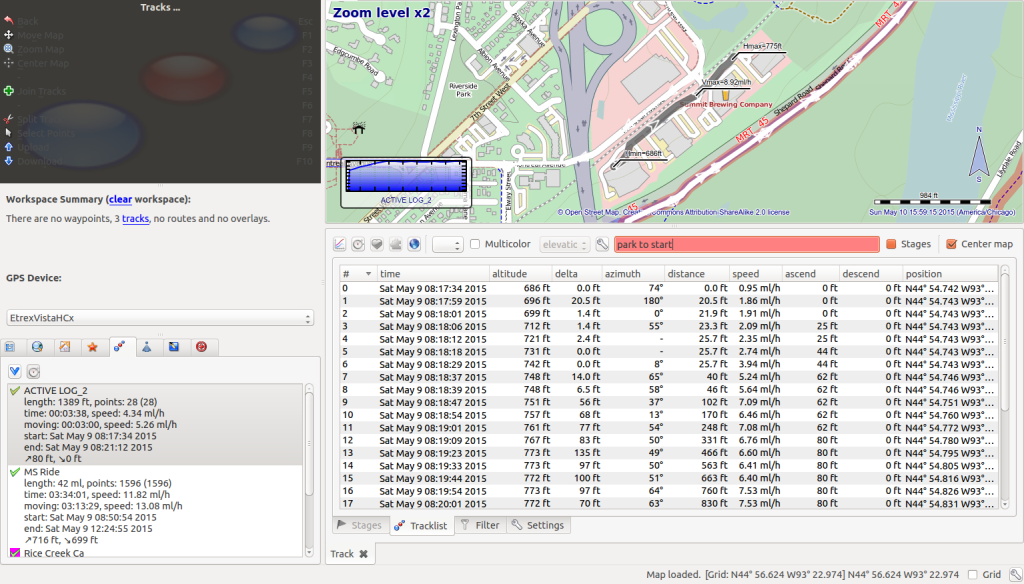 Typically I also need to join tracks, especially if I turned off the GPS at a stop or if the GPS lost signal at any point. Joining tracks is also clunky. You don’t select the tracks and then choose “Join Tracks”, you choose “Join Tracks” which brings up a dialog where you can specify which tracks you want to join, and what new track to save them as: 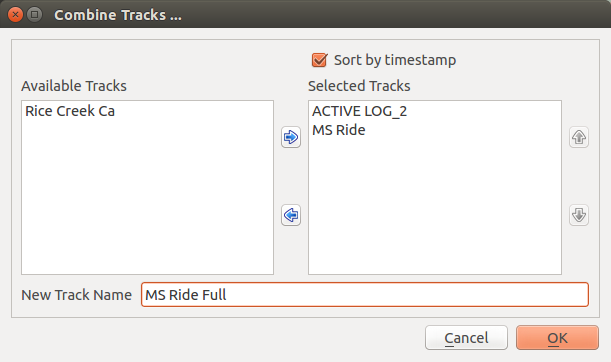 Now that I’ve got my track organized, I want to save it as a GPX file. This took me a while to find, but you need to select File -> Export Geo Data. Then after you select a filename, you’re prompted to select what GPS elements you want to save: 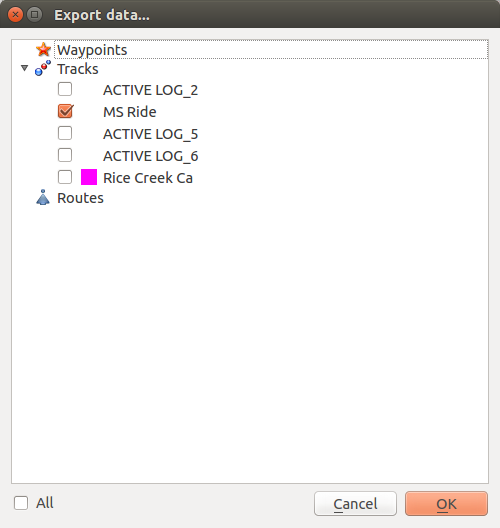 Use the “All” checkbox at the bottom left to un-check all elements, and then you can select just the track(s) you want to export.

Then I can upload them to Strava using their easy-to-find file uploader. Here’s how it looks in a post using WP-Strava: