Long before I was into bikes I was into sports cars.  Before all you vegan hippies vilify me, I’ve been working from home since 2008, significantly reducing my carbon footprint, plus I recycle like the dickens.  However, my love of sports cars has ingrained some preconceived notions about what I consider convenient, functional, and stylish.  Having been newly re-acclimated to the cycling “scene,” I’ve found there are aspects of the bike industry that I cannot (and will not) conform to.  Instead, these are my workarounds.

Presta valves.  I understand these things may be more advanced in technology than the lowly normal-guy Shrader valve found on everything else with pneumatic tires.  But since it’s a numbers game, I’m going with Shrader.  I already have several quality (read: accurate) tire gauges and an air compressor for Schrader valves.  Also, forget about the valve adapters – they suck.  Many standard air chucks require the center pin to be depressed in order to dispense air (like those found at gas stations).  The adapter will not accommodate this.  The Bike Snob would be disappointed in my approach, but as he knows AYHSMB (All You Haters Suck My Balls), plus I’ve bought both of his books.

Drilling for a Schrader valve

I almost get a sadistic pleasure out of drilling a larger hole in a nice new set of rims, and I’ll tell you how to do it.

Am I worried about weakening the rim?  No, today’s double (sometimes triple) wall rims are certainly up to the task.

Some department store bikes now apparently have faux deep-V rims with Schrader tubes, which has led to the availability of long-stem Schrader tubes at your local bike shop as replacements.  This was a great match for me to drill out a Shimano deep-V wheelset off of Craigslist – no regrets!

I use my bike for transportation and recreation.  When I arrive at my destination I don’t want to be clip-clopping around like a horse on a city street.  But I do like the feeling of being “strapped in” on my road-going bike.  So I’m perfectly content to run a cheap set of rat-trap pedals with some leather straps, as it allows me to arrive wearing “normal” footwear: 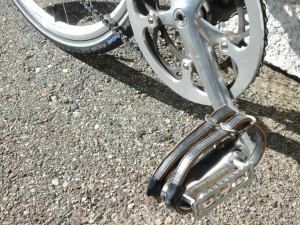 I added the bash guard as an extra measure to keep my pant cuffs out of the chain (see cartoon below).  If it happens to protect the chainring too – bonus.

The final and most controversial aspect: cycling attire. My approach is generally as such:

However there was one point when I could be found in spandex shorts and a cycling cap ala Wes & Woody in White Men Can’t Jump.  It was the early 90’s and cycling-wear as fashion had permeated enough to reach the Midwest – the final bastion of fashion trends.  This was presumably fueled by American cyclist Greg LeMond‘s three Tour de France victories.

I don’t mind cycling jerseys, in fact I like them, but I tend to wear them one size too big.  That is, I like the jersey to hang a little loose rather than being skin tight.  I’m not riding in the Tour de France, nor do I have the body to prove it.

Cycling shorts on the other hand, cannot simply be purchased a size larger.  I agree that the padded spandex serves a purpose, but cycling clothiers should take a hint from their running brethren: sew the spandex in as a liner, with a “regular guy” exterior.  This does exist in fact, sometimes marketed as “mountain bike shorts” – probably because mountain bikers are more likely to be regular guys on bikes.

10 thoughts on “Regular guy on a bike”