This post was originally supposed to be titled “My commitment to Ubuntu.” But I couldn’t take it. After 2 years of using Unity and watching it evolve one step forward and then dwindle two steps back, I decided it was time to give GNOME another chance.

Don’t get me wrong… I’m still committed to Ubuntu, and moreover Linux and Open Source in general. I’ve tried quite a few Linux distributions: Slackware, RedHat, Fedora, Gentoo, Debian, and Ubuntu. I don’t mean I installed and tried them for a week, I’ve used each of those distributions for over a year on a day-to-day basis.

I have stuck with Ubuntu since 2008 because it seemed to have the most momentum, the most desktop distribution market share (which equates to better support), and the most polished overall package.

As such, I’ve always tried to stick with whatever Canonical recommends for mainline Ubuntu Desktop. That meant using atrocious iTunes wanna-be softwares like Rhythmbox and Banshee (to this day I’m unclear as to the difference between these two). However, I’d stick it out just so I knew what the normal user experience was – feeling the average users’ pain, and reporting bugs along the way.

Why Ubuntu decided to drop GNOME in favor of Unity has always puzzled me. As per my rule, I went along for the ride into the Unity experience. I like the simplicity of Unity, having used it as part of the Ubuntu Netbook Remix / Edition or whatever it is/was called. But I feel it was moved into prime-time a little too early.

All of my complaints with Unity are in regards to hardware support (or lack there-of). For my office, I prefer to use my laptop (a huge desktop replacement) with an external monitor in “portrait” mode: 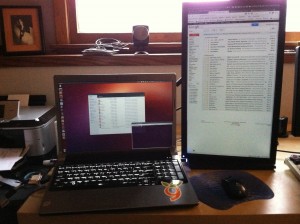 In the beginning (Ubuntu 11.04), multi-monitor support was abysmal. My monitor setup would get rendered as one large canvas. The laptop & monitor are like a backwards “L” and the rest of the area (above the laptop and to the left of the monitor) becomes what I call “No Man’s Land.”

System tray icons that were written for “legacy” GNOME support, like Skype, would be rendered up in No Man’s Land, where no one can see them. The only reason I knew is because you could see a tiny green icon up there when using Unity’s “Expo” feature. The mouse cursor could go up into No Man’s Land (confusing), and application windows could also be moved there accidentally.

Then on a later release all of the system tray icons needed to instead use a different “indicator” API. So every system tray app that was previously working in GNOME and hadn’t kept up with the Unity trend, now had to have an indicator wrapper to make it useful (or even visible).

So after two years of Unity advancements, you’d think it would be awesome now, right? Nope – 12.10 is the slowest Unity ever. I tried it for a month and decided it was the final straw. I don’t know exactly what happened. Maybe I was previously using Unity 2D or had shut off all of the effects. Frankly I’m glad I don’t have to remember all the stupid minutia anymore. But in Ubuntu 12.10 there is no “giant off switch” for all Unity effects, and my computer feels like everything is “Powered by Java.” ™ Slow menus, slow window switching, slow window moving, slow desktop switching! I thought I had fixed the slowness by turning off vblank_mode for my Intel GM45 graphics card, but when I attached my external monitor, slowness resumed.

Maybe the Unity slowness is caused by the sheer size of my desktop, since it is effectively rendering a 3000×1920 pixel area. Maybe my graphics card is just a wimp. What ever it is, I give up. I found that GNOME is still alive and well in the Ubuntu repositories. I suggest to anyone that is stuck in the muck with Unity, exorcise your demons! Execute the `apt-get install` command from that page. Don’t bother with activating GDM over LightDM – GNOME really only recommends it because GDM is themed to look like GNOME “Remix” (see below). You can also skip the `apt-get remove` in case you want to go back to Unity – especially if you’re a masochist. If your user account was set to automatically log in, turn it off so you can choose between GNOME/Unity when you restart.

I tried the GNOME “Remix” and it was cute, but seemed to be plagued with similar issues that Unity had in the beginning: in-configurable virtual desktop switching, poor multi-monitor support, limited flexibility with system-tray apps/indicators.

GNOME Classic. Like Coke Classic, this is it. Why did we ever abandon this? It felt so comforting to be using GNOME again. Everything works just as I remember, plus it’s a little more polished. The ironic thing is, GNOME also uses the Compiz 3D compositing system, but it performs far better on my hardware/monitor configuration than Unity. Like I said, I don’t care what magic makes it work, as long as I can get back to work.

I’m happy to report that Unity in Ubuntu 13.04 is much better regarding performance specifically with my Intel graphics chipset. After 2 months of solid use I can report that it’s definitely back in a usable state (for me at least).

Unity, Ubuntu, and all Linux distros (including the Linux kernel itself), have always suffered from 1000 paper cuts. It’s always been useful for me as a tech geek, but I see and can understand how the minor annoyances add up to someone not being able to make the switch to Linux full-time.

My current issue with Unity is a strange bug where if I have a browser maximized on my 2nd display and I try to open a new tab from a different workspace (via Instant Messenger usually), when I switch back to the workspace containing my browser, it has magically moved to the primary display.

It’s not enough to make me abandon Unity again, but combined with something else it might be.