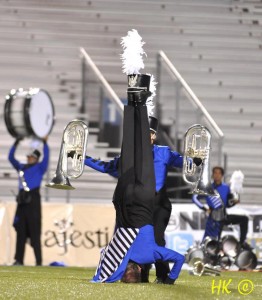 With the 2012 drum corps season over, let’s talk about the elephant(s) in the football stadium: Drum Corps International (DCI) & Drum Corps Associates (DCA). DCA is probably not an elephant, because there’s a chance you’ve heard of DCI and shrug when I say “DCA.” But we’re talking about sustainability of drum corps as a whole – and more importantly: survivability.

There are obvious resources that should be shared amongst these organizations, such as ticket sales outlets, and media production for broadcast/recorded events. I think DCI and DCA recognize these opportunities, but they’re falling short elsewhere.

The basic problem is stubbornness on the part of both parties. This ultimately gets interpreted as elitism and intolerance. But the bottom line is: the activities are the same. Does DCI need DCA? No, but they definitely can (and do) benefit from it. I’m not saying the two organizations should merge, but more cooperation would benefit both groups.

DCI may be unknowingly killing itself

Drum Corps Midwest (DCM) had the right idea where units from all classes/divisions could gather at a competition and compete – who would have thought!?! People were entertained, crowds were drawn for the variety of units. However, DCM may not be a good benchmark since it no longer exists, but I think it was a sustainable approach. It’s demise may still remain a conspiracy theory… some argue that DCI actually killed DCM by luring the top-tier corps away from DCM competitions by strategically planning and inviting corps to DCI competitions scheduled on the same day.

You’d think with a name like “Drum Corps International” all corps would be welcome to compete. Not exactly. With the demise of DCM, the non-east-coast DCA corps are effectively out on their own. I don’t think certain DCA competitions can sustain themselves where three units compete in front of a crowd that’s outnumbered by the membership of the corps.

I’d like to say that DCI is doing it’s best to promote the smaller open class junior corps, but I get the feeling that they probably feel like outsiders as well. The open class and all-age corps are still fantastic outlets: closer to home, and usually more affordable. These are the stepping stones of the activity which should be the foundation. Instead they’re being crushed under the weight of their own league(s).

DCA is getting better, but (literally) cannot compete

The Stigma of Senior Corps

Sometime during the mid-aughts, DCA changed it’s moniker of a “Senior Corps” organization to an “All-Age Corps” organization. While the distinction is small, I think it’s important. It helps remove the stigma that DCA corps are for old guys. The truth is, DCA corps are getting younger every year as many would-be Junior Corps marchers are using their local DCA corps as a stepping stone to gain experiences a traditional marching band may not provide. At Minnesota Brass, it is not uncommon at all to find someone who marched in Brass, went on to a top junior corps, and then returned to Brass after aging out.

I get the feeling that DCI still sees it as old-guy drum corps, and is missing the opportunity to engage all-age corps into what should be one big drum corps family.

I’m also not saying that DCA needs to follow DCI rules (and rule changes), however when they make sense, the changes often happen all the same. Some examples include:

This makes financial sense for all corps. When I marched in junior corps, we played the same set of G bugles purchased when 3-valves were allowed. With any-key instruments, the prospect to re-sell the instruments to virtually any band program has allowed corps to keep a new rotation of quality instruments without busting the budget. 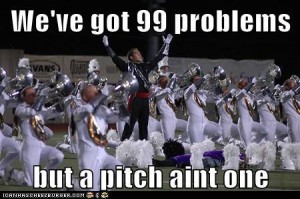 Drum Corps Associates doesn’t allow electronics, and I like that. It’s one aspect of the old-school attitude that doesn’t negatively impact the sustainability of the activity. It merely requires quality staging and creative arranging on behalf of the staff. 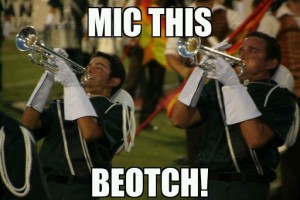 I’m not advocating that DCA & DCI finals be combined into a single event. DCI finals is timed right because the corps have been working full-time all summer on their craft. It gives the members enough time to return home and prepare for school. DCA corps’ are weekend warriors and cannot afford the same time commitment, so keeping finals on Labor Day weekend gives them that extra few weeks to prepare. It also provides a unique opportunity for returning junior corps members – who have the process of learning music and marching fresh in their mind – to fill any vacant holes in DCA corps.

The biggest issue right now (as I see it) is the judging. DCA corps performing at local drum corps shows are the minority amongst other DCI corps. There will probably be DCI judges adjudicating the event, and when given the DCA judging sheet, confusion ensues. Look at the recap from this 2012 DCI show in Stanford, CA. The Renegades get no numbers for any captions but the judges are still able to come up with a final score of 67.15 – where does that number come from?!?: 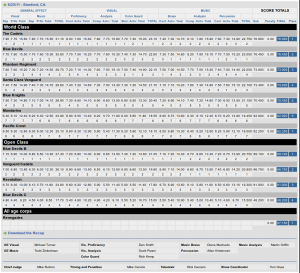 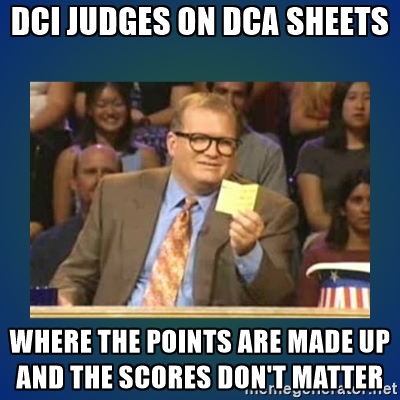 Combining judging efforts would allow for DCA corps to get a better read early season at shows where there may be only one or two all-age corps. Given the same judging pool, there’s a chance you might even see the same judge more than once during the season. Clearly it makes much more financial sense to fly out a judge than to bus an entire corps thousands of miles just to get a read from “proper” judges.

Let’s make all the judges proper, and bring this divorced family back together again.